Who is Edward Snowden?

Edward Snowden is a former spy and member of the intelligence community that revealed the secret spying and mass surveillance that the United States government and National Security Agency (NSA) was conducting under the guise of national security. Once Snowden leaked classified documents, top publications such as The Guardian, The Washington Post and The New York Times wrote articles that helped spread the word to the world.

The Guardian kicked everything off in 2013 with documents that showed that the Foreign Intelligence Surveillance Court forced Verizon to give information to the NSA regularly.

Then The Washington Post followed up with information on PRISM, an NSA program that collects personal information in real time.

Needless to day, Snowden’s revelation was a huge blow to the intelligence community and in response to him leaking documents about the U.S. government mass surveillance program, Snowden was charged with theft of government property, and two further charges under the 1917 Espionage Act. However, before being captured, Edward Snowden fled from Hong Kong to Russia for asylum. He was actually on his way to a Spanish country, but the US got his visa restricted and he has remained in Russia for several years.

For more information on Snowden’s journey, check out Joe Rogan’s interview of Edward Snowden that was recently conducted while Snowden remains in temporary asylum in Russia.

What is the Edward Snowden Movie About?

Snowden screened at Comic-Con on July 21, 2016, before premiering at the 2016 Toronto International Film Festival on September 9, 2016. The film was theatrically released in the United States on September 16, 2016, by Open Road Films and on September 22 in Germany. It received mixed reviews and was a box office disappointment, grossing $37.3 million worldwide against its $40 million budget.

Joseph Gordon-Levitt heads an all-star cast in Oliver Stone’s version of the life of controversial whistleblower Edward Snowden.
Oliver Stone has rarely been known for reticence and restraint, but the big problem with Snowden, his rendering of the story of whistleblower Edward Snowden, is that it’s earnest, decorous and — dare we say — a tad dull. Of course Snowden’s story is by now pretty familiar from news reportage and from Laura Poitras’ Oscar-winning documentary, Citizenfour. Even an award-winning documentary is only seen by a relatively small number of people, so there’s an argument to be made for dramatizing the story with expensive production values and well-known actors portraying the characters. Although Snowden has been vindicated in many quarters, he’s still controversial to some, and the technical universe he inhabited is slightly impenetrable to admirers and detractors alike. So it’s hard to imagine hordes of people rushing to see his story onscreen again, especially when told in such a hushed and bloodless manner.

Snowden himself was something of a geek and technocrat, not the kind of flamboyant figure who populated many of Stone’s earlier movies. And Joseph Gordon-Levitt does a good job of disappearing into the guarded, self-contained character. But he’s not the kind of character who will draw intense audience empathy. And the pedestrian, sometimes disjointed script written by Stone and Kieran Fitzgerald doesn’t do the actor any favors.

The film begins in 2013, when Snowden set up a meeting with Poitras (played here by Melissa Leo) and journalists Glenn Greenwald (Zachary Quinto) and Ewan MacAskill (Tom Wilkinson) in a Hong Kong hotel room. There he presented them with information he had smuggled out of his NSA office in Hawaii that documented the government’s massive surveillance of American citizens as well as overseas contacts. The film keeps returning to those scenes in Hong Kong, but most of it consists of flashbacks that begin in 2004, when the 20-year-old Snowden tried to enlist in Special Forces but was sidelined by an injury. He came from a military family and was motivated by a patriotic response to the terrorist attacks of 9/11. Although he never graduated from high school, his brilliant mind made him a natural to work as an analyst first for the CIA and then the NSA.

As the film tells the story, Snowden gradually becomes disillusioned with some of the slippery tactics of his CIA superiors, and he feels alarmed when he learns the extent of the surveillance engineered by the government. In one argument with his mentor (well played by Rhys Ifans), his boss tells him that the government programs have prevented major catastrophes, whereas Snowden argues that citizens should have knowledge of what is happening before surrendering their freedoms.

Snowden also begins a love affair with Lindsay Mills (Shailene Woodley), a photographer who is troubled by his secrecy. Stone has rarely been successful with female characters in his movies, and although Woodley is a talented actress, the role is little more than a variant on the stereotypical wife or girlfriend always telling her man to be careful and railing when he shuts her out. Lindsay never blossoms into a full-blooded, distinctive character.

There are a lot of good actors in this movie, but aside from Gordon-Levitt, almost none of them has a chance to etch an indelible character. Many of Stone’s earlier movies, as overheated as they sometimes were, did provide an opportunity for energetic hams like James Woods, Tommy Lee Jones and Woody Harrelson to chew the scenery entertainingly. Leo, Wilkinson and Nicolas Cage have so little to do here that we would never guess they had won awards in other films. In the large cast, Ben Schnetzer (who plays a scruffy colleague of Snowden’s and who also stars in this month’s frat movie, Goat) is almost the only supporting actor who has a chance to get a humorous rhythm going.

Stone’s direction is measured, methodical and totally lacking in the fire and flamboyance that sometimes electrified and sometimes ruined his earlier films. The story moves along without any real sense of urgency or suspense. It may hurt that we know the ending of Snowden’s story, though of course his legacy is still being debated.

Oscar-winning cinematographer Anthony Dod Mantle (Slumdog Millionaire) brings some pictorial flair to all the various locations where the story is set. Those who don’t know much about Snowden’s story may still find this movie enlightening, but it never achieves the emotional force that Poitras achieved in her film with the real Snowden front and center. He appears at the very end of this film, and he only reminds us of what the rest of this well-crafted but lackluster opus is missing. 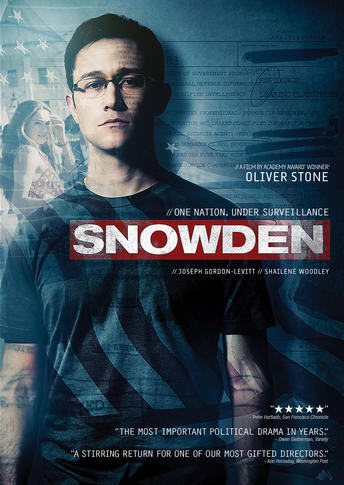